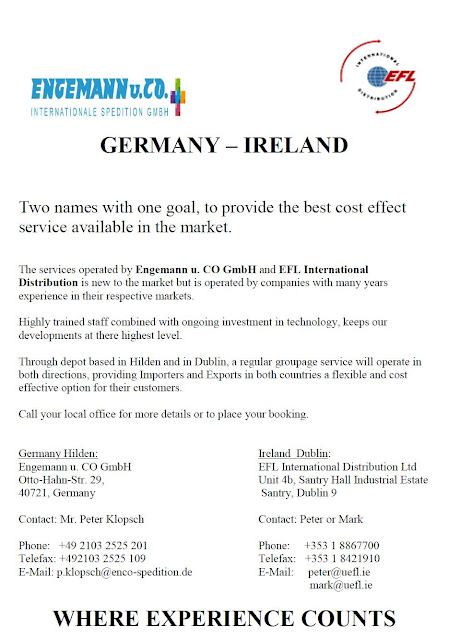 Posted by EFL International at 9:16 AM 2 comments:

Pet imports to Ireland, a first for EFL International

EFL International Distribution Limited became the first company in Ireland to gain approval as a carrier under the Pet Passport System.

As a consequence of changes in European legislation relating to the movement of pet animals within the EU, EFL International Distribution, based in Dublin, increased their pet transport division with more resources relating to the handling and moving of live animals.

In December 2011, EFL International received authorisation from the Irish Government Department of Agriculture, Food and Marine, to operate as an approved registered carrier of Pets into Ireland from other EU member states.

EFL continued to seek ways to improve services and have now become the first freight company in Ireland to be granted authorisation to operate as a transporter of pet cats and dogs under regulation 6 of the European Communities (Pet Passport) Regulations 2012.

This allows EFL International to provide full document and animal examination of pets arriving from countries considered to be of high risk for animal diseases, services that were traditionally only available at one Government approved veterinarian clinic in Dublin.

“We will provide these services at Dublin airport by using a mobile clinic” comments Chris Radley, Air Freight Director for EFL International.

“We can now arrange to move pets from the five continents of the world to Dublin and look after the arrangements with the Department of Agriculture to provide a safe and speedy release of the pet to the owners, once the complete checks have proved to comply with regulations. In association with Vets Direct, all pets will be checks in a controlled, sealed environment within the mobile unit."

The first clients to use the new mobile unit will be two cats originating fromThailand. The UFL office in Bangkok worked with EFL International to arrange the movement to Dublin. EFL have also exported pets from Ireland to various countries globally, one Saint Bernard was moved  recently with the assistance of the UFL offices in London to Yangon, Burma.

Posted by EFL International at 9:51 AM 5 comments:

Sister carriers Cathay Pacific and Dragonair this week revealed that cargo and mail tonnagefell significantly during May. The two Hong Kong-based airlines carried 123,403 tonnes of cargo and mail last month, a drop of 10.6% on May 2011. The cargo and mail load factor was down by 5.9 percentage points to 62.3%. Capacity, measured in available cargo/mail tonne km, decreased by 7.3%, while cargo and mail tonne km flown dropped by 15.3%. So far this year tonnage has declined by 10.7%, against a capacity drop of 4.1%.Weak demand also resulted in the final demise of Jade Cargo, the troubled Chinese joint-venture carrier established by Shenzhen Airlines, Lufthansa Cargo and German financial institute DEG.Its fleet of six freighters was grounded in January. All Asia-Pacific carriers have suffered from falling demand by US and European consumers for Asian manufactured goods.In February, the shareholders – Shenzhen Airlines (51%), Lufthansa Cargo (25%) and  DEG (24%) – attempted a restructuring deal with Shenzhen-based UniTop Group, which failed.


Source   IFW
Posted by EFL International at 5:23 AM 2 comments:

Freight rates in the Asia to Europe container trades have seen spot rates more than triple since late last year, and look set to rise further as lines impose more increases in the coming weeks.


Most lines have announced their intention of seeking another $400 per teu on May 1, but APL and OOCL will be asking for $450 more. Shanghai’s container throughput also reached 7.5m teu in the first three months of this year, based on year on year growth of 3.5%.


Container imports to Europe increased 4 percent in February, while exports grew 8.89 percent, according to the latest analysis from Container Trade Statistics.  Rotterdam posted a 4% decline in volumes in the first quarter to 2.8m teu, despite a 1% rise in total box weights to 30m tonnes.


In Asia, Singapore handled 7.5m teu in the January-March period, up 6.6% on year. Inactive capacity now stands at 274 ships with a total intake of 492,000 teu, equivalent to 3.15% of the total fully cellular fleet, according to Lloyds List latest idle containership survey as of the 11th April 2012.


Braemar Seascope have reported that scrapping activity is picking up, with 35 ships sent to the breakers in the first quarter of the year, and almost a half coming from the 2,000 - 3,000 teu range. Braemar estimates that 120 ships of just over 193,000 teu will be removed this year, representing 1.2 per cent of the fleet.


Source:  IMDO
Posted by EFL International at 9:31 AM No comments:

The decision by the Federal Administrative Court in Leipzig to uphold a night-flight ban at Frankfurt Airport will damage one of the world’s premier gateways for international trade and harm the local and national economy, said the Chairman of The International Air Cargo Association’s (TIACA) Industry Affairs Committee.

Despite strong industry protests, the court’s decision means the ban on flights at Frankfurt between 11pm and 5am will remain in force. The court also reduced the number of flights allowed in the hour before and hour after the night period.

TIACA has previously warned of the potential economic and environmental damage that would result from the night-time flight ban, a prime time for freighter movements that support fast deliveries of essential products throughout the day once they leave the airport.

The association said restricting freighter movements would reduce future investment by companies at Frankfurt Airport and could lead to job losses. It also warned of a negative impact on the environment from greater trucking operations if all-cargo airlines were forced to use other airports.

Oliver Evans, Chair of the Industry Affairs Committee, said: “We are extremely disappointed by the decision.

“Slots are a major battle ground for airlines at major airports across the globe and in recent years to satisfy the requirements of passengers, all-cargo operations have been pushed into the hours of the day, and the night, when passengers don’t want to fly. The air cargo industry has adapted to this and made it work.

“Today, night-time cargo flights are part of a seamless supply chain that means consumers and businesses can plan their stock levels and production schedules with confidence. This is now at risk.

“Until courts, businesses, industry and members of the public start to understand how much they rely on air cargo, the danger is that the decision made in Frankfurt could be repeated at other major gateways.

“If this happens, it’s not only the air cargo that will suffer: local communities around those airports and national economies will also pay a higher price, both financially and environmentally.”
Source:  IFW
Posted by EFL International at 4:52 AM No comments: